Posted on September 2, 2010 by amritaperformingarts

“Breaking the Silence” is a play about regaining hope. This is a tale of real stories of people who survived the Khmer Rouge regime in Cambodia.

The play is directed by a renowned Dutch Director, Annemarie Prins, and performed by Cambodia’s four well-established actresses, one musician, and one singer. The production was designed by three young emerging Cambodian visual artists with advice from professional Dutch set designer Ferry Smidt. 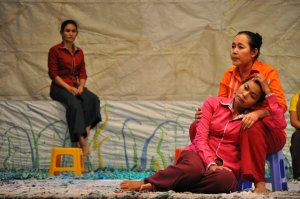 Original production was ponsored by the Prince Claus Fund, The Embassy of the Kingdom of the Netherlands, and Theatre Embassy, Amsterdam. Research assistance was provided by Documentation Center of Cambodia.

“Breaking the Silence” was premired in Cambodia in February 2010 and toured to a number of provinces across the country. It was also featured at the Cambodian Youth Arts Festival 2010 in Phnom Penh.

The performance is 75 minutes with no intermission, performed in Khmer with English surtitles. There will be a post-show dialogue with the artists.

For further information and ticket, please click on photo above!

This entry was posted in Breaking the Silence, Theatre. Bookmark the permalink.